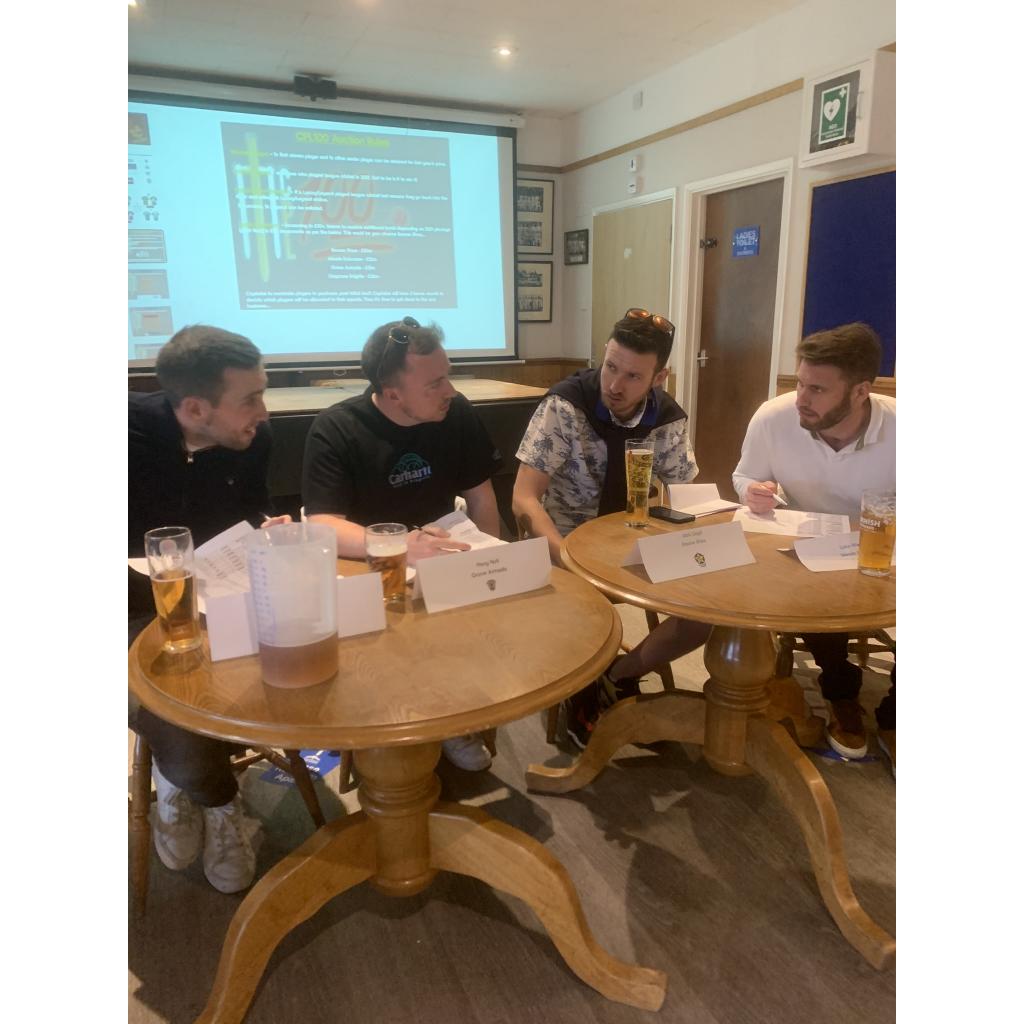 Winter nets complete. Friendlies complete. Its time to start the league season. Most of you will have played one or two games by now, but now its time to get down to business. Time to get in formation; Colts, Ladies, Seniors, Social, and combine as one CCC, we support each other come what may, celebrate the wins, pick each other back up after the losses. Do your best, that's all you can do, but do it for Chertsey. Whatever tribe you are part of, let's do this.

The Social League is All Grown Up!

One tribe who know how to get it done is the Social League. In the heady days way before the Hundred and T20 Blast, the Social League was born way back in 1997, when our fave Shane Warne (bahling Shane) was all the rage. A way was found of combining pyjama cricket and beer, two of our favourite things. Now its in its 25th year (to celebrate we have a tie in with our 100 Years at Grove Road celebrations) it is under the curation of the lovely man that is Richard Luff, and it has not lost any of its charm.

So what's the hook? 20 overs of semi-competitive cricket playing at your local ground and maybe seeing a man wearing a ballerina's outfit as a forfeit. We have two new teams joining the pack this year - Woking Council and Babs' Army, all trying to knock 2021 winners Marist off the perch.

So why not come down for the show from 6pm, there's simply nothing better than sampling a pint and a burger on a balmy Thursday night with a side of good, fun cricket.

Saturday night was CPL100 Auction night - and we had some bombshells. All given differing amounts of virtual cash to play with, the captains had different tacts it seemed when it came to their wish-lists. The big money was spent on Karthik Menon, your contract with home team Gogmore Knights is worth a staggering £14m virtual pounds Sir, followed by oversea Eric on £11m and Josh Jackman on £10m. Retention will be fun next year...

You can check out the squads and goings on here: https://chertseycc.org.uk/pages/chertsey-premier-league

Last Chance to Join the Ladies & Girls Open Evening on May 9th...

Next Monday (the 9th) sees the Ladies & Girls hosting their annual open evening at the club after a hugely successful night last year. Whatever your age or ability you are most welcome - there's still time to register your interest with us by emailing us here at comms@chertseycc.org.uk.

The Ladies played their first Slam match last night and had a blast against Ashford, they also open their League account this Sunday and its Lucy Weber's first game in charge as league captain, so come and show her and the team some support from 2pm. The girls also make their first ever dedicated competitive league appearance against Reigate Priory on Sunday so things are looking very busy and bright.

So to the weekend, people. A tale of every weather condition and decibel level known to man. The last round of friendlies before the off saw the 1s & 2s home and away respectively against Old Rutlishians. Motorway madness and a very late Rec cancellation for the 3s (poor form from East Molesey there) ensured our afternoon was to be spent in the company of the 1s. And they had a newbie amongst their ranks - Eric Osner made it from Cape Town to fulfil the role of overseas for the 2022 season and hadn't been in the country 24 hours before he was putting on the famous blue cap.

Chertsey, bowling first, were slow to get going and lost keeper Jonathan Thompson early on (a wobbly soon-to-be black finger there). Eric made his mark by catching a skier that went so high when it came back down it had moon dust on it for the first wicket, Jacob Loveridge activated Angry Cracker mode, something that usually reaps rewards, and Josh "The Fridge" Jackman was especially on point. Old Ruts finished 204-6. In reply the wheels came off a touch, and we lost two wickets for 15. By 20 overs deep another four had departed and it seriously looked like we were going to be on the end of a howler. Step forward Dave Risk (stand in keeper) and Jamie Anthony, who steadied the ship and pushed things on to 112, blushes spared and good prep overall for the league to come.

On Thursday night Sunday Captain Hugh Aish-Lyons had an empty ground plop into his lap and Stoke D'Abernon were up for the Sunday Funday challenge. Apparently there was something rather loud going on over the fence at 3pm, and as we sat the other side with twenty two cricketers in front of us and a packet of crisps we revelled in the space and peace. Ish. The Sunday side batted first, Jack Lloyd in his first appearance this season, Shyam Patel with his first runs (39), but it was 7 & 8 Captain Hugh & James Harrison that came good, 104 biffed between them (Captain Hugh 66), and Stoke D'Abernon were set 215 for the win.

In reply Shyam Patel impressed, two ridiculous skier catches (James Barnes the bowler), and two wickets (one a ct & b), and a sight we always like to see, Arthur Walmsley with his wibbly wobblers, which earned him a place in the wickets column. With Stoke D'Abernon a man down and time ran out Hugh's (first of many) Sunday win came, the crowd of one went as bananas as over the fence.

Bank Holiday Monday saw the Seniors entering the T20 format in the shape of the Edwards Cup, and next league up Walton were our oppo. Talisman Jake Taylor was back in the fold and started where he left off the indoor comp, hitting 19 off 11, Elliott Bloomfield (22) the lynchpin for Karthik Menon (33) and Eric Osner (17), and the target of 120 was set. Not quite the 160 Captain Hanger would have liked, so it would be a tight chase.

Walton started steady, Oppo Captain Roberts was snuffed out much earlier than we think he would have liked, but it was a clever use of the bowlers that was the difference, Jamie Anthony removing the Walton batsmen at just the right time, 4-13 his final figures. Qudos to spin twins Wil Cooper & Shyam Patel for slowing Walton down, and a level Westcott head for entering a maiden wicket over just when it mattered. It went close, the win by just 11 runs, but a bright response by Captain Hanger. We like a cup run, and we're not too shabby at them, so who's up next? Sutton away it looks like. Let's hope Jamie Smith is otherwise engaged. Oh eck.

Over in the Colts corner on Sunday the U15s were in their first tier 1 game ever, and had a blinder, Freddy Bachman had obviously had his Weetabix, with a hat-trick and a 5-fer, earning himself a Bluecaps Champagne Moment of the Week (lemon Fanta and a Simpsons Chicken (other "chicken" is available) in this case obvs). There were runs-aplenty too, Arthur Walmsley (49), Mark Lemon (31), Mickey Grigg (25), Dylan Pandya (23), James Pearson (21), and a win by 103 runs. Like that. A lot.

We had our first Monday Matches - in this edition a double header; U11s already had a win against Egham in the bank but came away unlucky against Ham & Petersham, and the U12 devvers were up against Staines & Laleham at the gloomy Edward Stern - some excellent tekkers on display in that one, a game featuring 20 consecutive dot balls, and Lola Hubbard with some balls of the century, and most importantly, a win. U12s, think you're our new favourites.

This weekend sees things kick off in the league for the Seniors and Ladies, and its a trip to Sanderstead for the 2s (they of live streaming fame so we'll be on the telleh), and the 3s and 4s aren't going to confuse us much at all by playing teams that sounds very much the same (Epsom & Esher) so apologies in advance there.

The Ladies make it their third game in five days with their League game against Godalming in div 1 on Sunday from 2pm, and we should be mid-heatwave by then, so come down and show them your support.

Just for info here are where we're starting league-wise for the Seniors and Ladies:

U12 dev v Walton on Thames

Dates for Your Diary

5th May - First round of the Social League