In the early 1920s the club played a lot of their games at Chertsey Rec, but it was time to try and secure a permanent home, as it was deemed the ground was not quite at the standard of the rigours of continuous cricket, an article at the time deemed it "dangerous and unsatisfactory, and that some neighbouring clubs declined to play there".

A new ground had been long-desired but deemed unrealistic due to the amount required to buy the amount of land required.

In the off season of 1921 it was down to Club Secretary WH DuCros, with passion and quiet enthusiasm to set about securing the £500 needed to procure 5 acres of land from local Lt Col EW Bryan (a Chertsey CC Vice President) in the Gogmore area named Gogmore Meadow. Surely the Clubman of the Year of his day.

Mr DuCros persevered and had promises amounting to £380, amongst them Sir Edward Stern, a local philanthropist and the current residing President of the time following the club's merger with Gogmore Cricket Club around the turn of the century, who chipped in the greatest amount, £248 10s. Mr RH Savory, a prominent local figure, parts with £50, and Sir Donald McMaster and Sir Phillip Richardson, the present and likely MPs for Chertsey each donated £10 10s to the cause.

It was with these contributions along with funds raised from local businesses (TE Stevens & Sons, Waterers & Sons to name a few),and members subscriptions the princely sum of £438 13s was raised, enough to purchase the ground.

The ground was put into trust, a law-abiding tradition that stands to this day. The first trustees were: 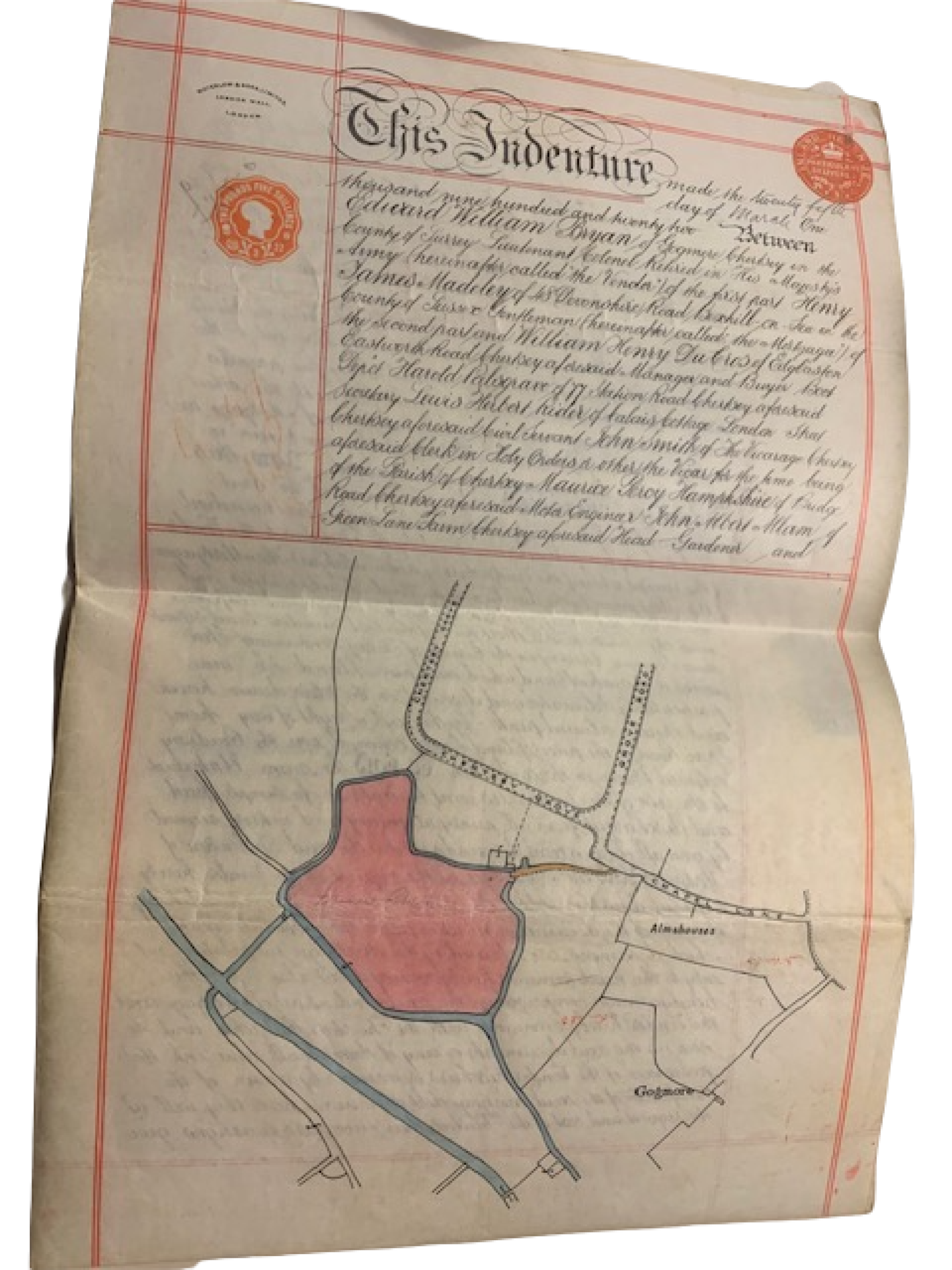 Deeds from 1922 show the boundary of land purchased by money collected during the 1921 off season by secretary WH DuCros. 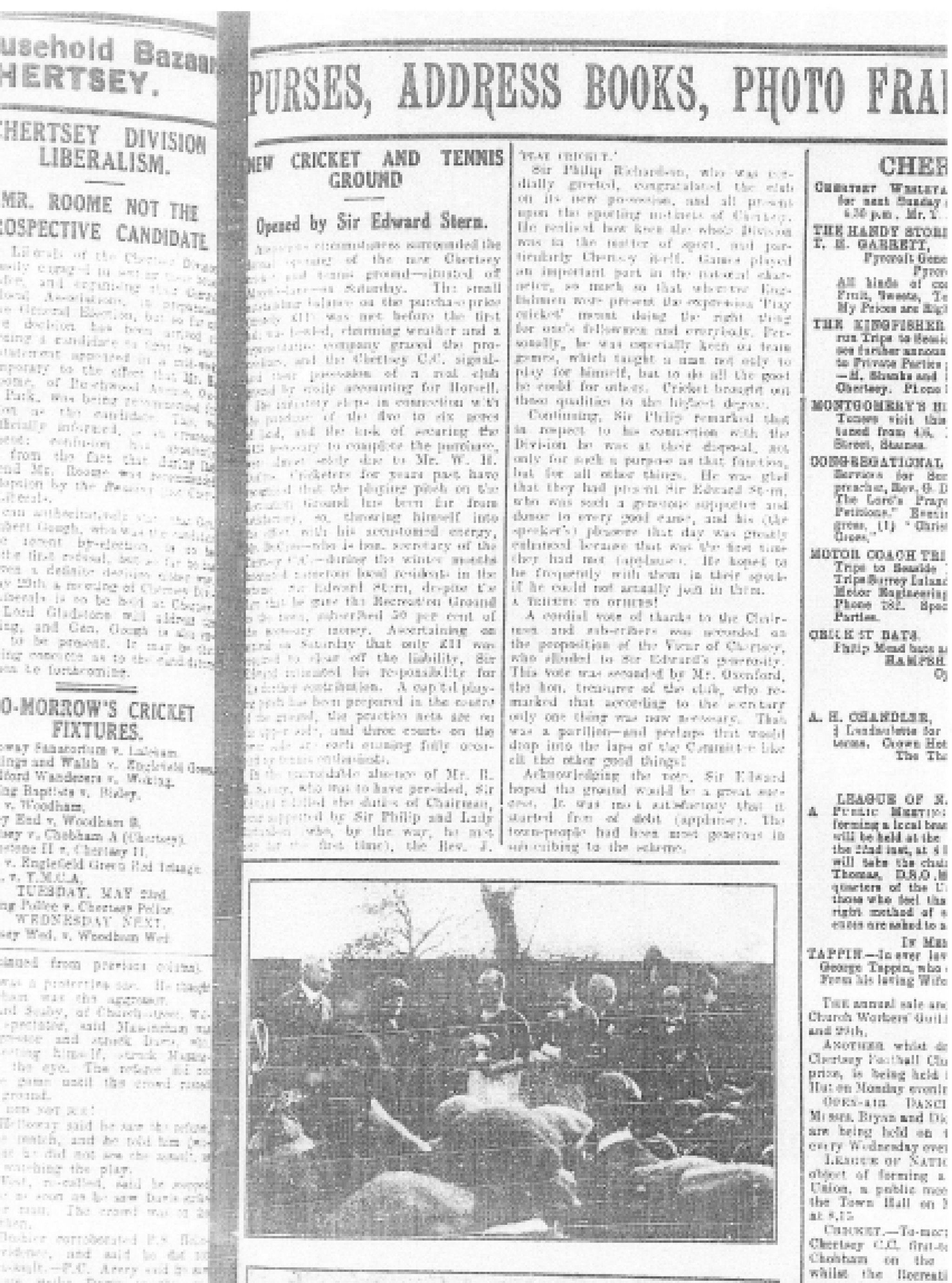 A colourful character - a British sport shooter, he competed at the 1908 (winning a silver medal) & 1912 Olympics. He became Chertsey's MP after the death of Sir Donald McMaster.

He also drove across the Sahara desert in 1937, piloted his own ligh aircraft, and wrote an autobiography, "It happened to me: Being the reminiscences of Sir Philip Wigham Richardson".

A Welsh journalist, he made his fortune with the publication of his magazine "The War Illustrated" during WW1.  He went on to form Allied Newspapers, who purchased The Daily Telegraph in 1927.

At Chertsey he was heavily involved with the development of St Anns Hill, and became our President from 1934 -1936.

A Canadian lawyer and politician, he emigrated to the UK in 1905 and by 1910 he was Chertsey's MP in the House of Commons.

Macmaster passed away in the March of 1922, two months before the ground was opened.

Appears in the Widen Almanack of 1878 after scoring 100* but is prominent in the community, giving out medals in 1918 to the Chertsey Women's War Work Association.

A huge thankyou to trustee Richard Dodd for providing us with access to his colection.