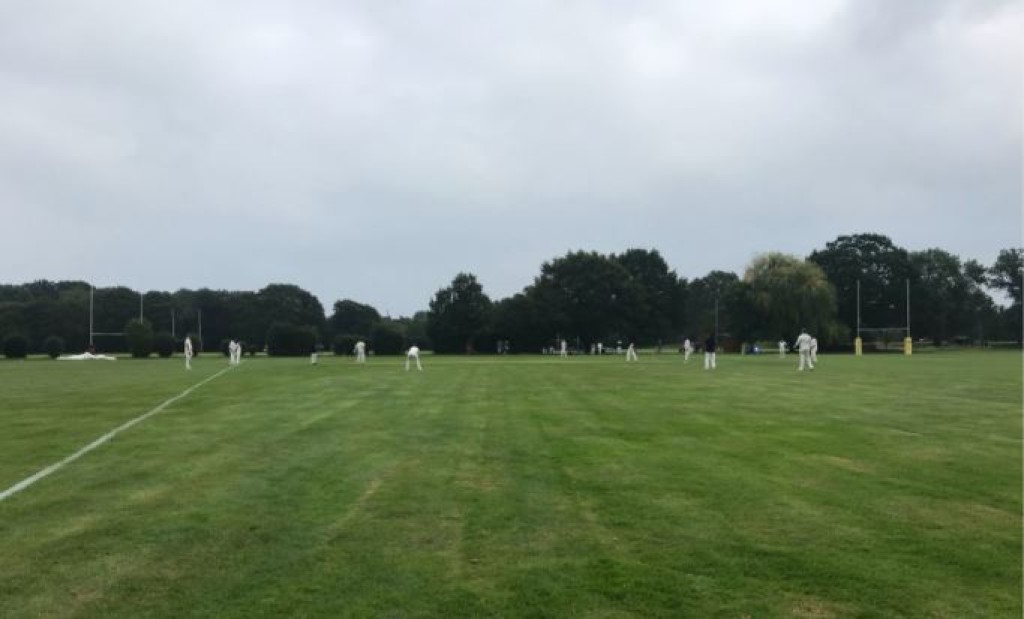 Bluecaps in Brief: Every 1's a Winner

Well, we are certainly in the autumn of our season, the rigours of league seasons starting to melt away, the hard work nearly done. So now it's time to have some fun, as we head into the bonus and awards seasons...

The end of season celebrations have already begun as last night saw the CSWs (or Colts Support Workers to you and me) receive recognition for all their hard work in the Colts section over the season - they're a vital part of ensuring the Colts fulfil their training and Coaches are supported so a big salute for all your hard work.

To start off awards season (there are plenty more awards to dish out) it's time for arguably the most glittering (and cheapest) awards we can give you - yes it's back - The Comms Awards... Back for its second year and open to everyone. We've snuck a couple of new ones in this season (we do love an award at CCC), so email us with your nominations before next Thursday lunchtime if you would.

NEW! The Jack Leach Cult Hero Award - We're looking for the player who never appears in Notable Mentions (we can't be everywhere), not one of your usual suspects. To the batsman who biffs, the bowler who accumulates scalps for fun, step aside, we're not interested in you, you'll get your moment in the spotlight. Which player in your team is your unsung hero and why?

Most “Village” Moment - We want your tales of unbelievable moments that you wouldn't (or technically shouldn't) usually see on a cricket field, this should be an easy one - we've had a few just in the last couple of weeks...

Champagne Moment (proudly sponsored by the Third Stump) - What single moment of the season in your eyes deserves a nod and a Drink of Champions raised?

The Bruce Raeside Award for Humour - Up to seven hours on a cricket field is a loooooooong time, so which person has got you through, anecdotes required to enter this one please.

The A-Six-aaaa Award - Which stand out performance deserves a mention, we love a stat so chuck that in if you can.

NEW! The Thank God That's Gone Award in Honour of Virat Kohli - Cricket is a gentlemen/women/child's game, but which team or thing were you most glad to see start the car and head back to wherever they came from? We're all friends here, let's get it all off your chest, it's just between us. Bogey teams, pandemics, and chirpers welcomed. Tea excluded from the vote.

Now, The final day of the league season is always a big, emotional party-atmosphere rollercoaster, the last day to ponder what might have been, or one final last-ditch push to get to where we need to be - rarely is there nothing to play for (think 2s' survival back in 2019 (we still shudder at the live stream), the treble winning season of 2018 for example), and Saturday was no different.

It was a huge day for the 1s who were standing at the gates of Div 3 cricket next season, the only thing standing in their way? Purley at home. We could make a funny about pearly gates here but we won't. They needed at minimum two bonus points for promotion, be that by 5 wickets = 1 point, 7 wickets = 2 points, 9+ wickets = 3 points and/or 150 runs plus for another point, maths enough to make your brain pop in any case. The day started well bowling first, with Purley finding themselves 33-3 but the #4 was keen and after losing his companion on 70-4 we just needed one more for a bonus point. Said #4 and #6 dug their heels in, and weren't going to let go of that 5th wicket easily, the partnership racked up 131, but it eventually came, and thus ensued a collapse of England 4th test proportions, the last six wickets falling for just 9 runs. It was so rapid poor President Pullo, our man on the ground, couldn't keep up with the wickets tumbling.

And so it took us a while for the penny to drop here (whilst leaving the 3s), but Purley all out, that's more than seven wickets, which are two bonus points, so we've got 10 wickets, so that means three bonus points, which means... PROMOTION! Phew. Maths has never been our strength. It was a long day.

With the pressure off, the win was now not as essential, but it would be nice wouldn't it to finish up with a win. Things didn't quite go to plan though, and the 1s were 77-6, but throughout the innings some healthy digits were added to the old averages, Jonathon Thompson chipping in with 31 on promotion from the 2s, Jamie Anthony 17, Luke Westcott 28, but the 1s ran out of wickets and fell short of the required. Such exotic locations as Streatham and Sanderstead (and their live feed!) beckon in Div 3 come May 2022 so there'll be some travelling to do... Huge well done team and in particular Captain Jack Ogle, what an achievement in his first full league season as captain.

The 2s were over at Walton and bowling first, asked all the right questions early on, with shouts frequently going up - it was Stuart Eagles who broke the opening partnership on 114 though, and the other opener went on to make a stand, Ethan Austin making him his only wicket of the day caught by Josh Fyfe. In reply the 2s had a mammoth chase on their hands, and despite knocks by Paul Hardwick (34), David Sloan (26) and Hugh Aish-Lyons (20) the chase was just too big and they came away with the loss, entering Div 2 and facing a fresh challenge - Oxted & Limpsfield, Cranleigh and the like next season, we think they'll be just fine.

The 3s were over at Kingstonian on pitch #3 (of the 9 they had there) and on inspection noticed something was lacking... A couple of inches of the wicket no less, (size does matter after all) so they were transferred to a makeshift pitch over the way reserved for the upcoming rugby match, much to the egg-chaser's irritation (also, sidenote, we're not a fan of cones as boundary markers - especially when the oppo make up imaginary lines between them). It worked though, as a chirpy and positive 3s made the ball talk, Ade Clayton in particular giving the ball so much air that it bamboozled four Kingstonians and earning him his best figures so far of the season, one a great "superman catch" c&b coined by the entertained spectators. Phil Boast chipped in with three wickets (managing to injure at least three limbs in the process - we're at that creaky point of the season) and Kingstonians were restricted to 130 all out.

In reply Sam Toone hit a quick fire 29 and along with runs from Troy Bolger (33), Barnaby Rowe on 3s debut with 12, stand-in keeper Vishnu Remesh with 23, and Phil Boast with 18 the win was secured within 26 overs, the 3s finishing eighth and safe from the drop with Egham (bombshell!) and Thames Ditton getting the heave ho. We're going to miss getting lost in Royal Holloway.

The 4s graced the Rec for the final time to take on Malden Wanderers and batting first James Pearson started well with three fours making up his 13, Captain Neil Latham biffed a glorious 44*, and Alex Ozer on senior debut smashed 21 off 30 balls, the 4s ending on 105-8 off their 40 overs. Malden Wanderers, who were eventually promoted, had time to play with but still found themselves on 25-2, Mark Lemon in the mix for both wickets, catching one and running out the second, eventually letting Beardy Steve Reynolds have a go, himself picking up the other two but by this point the Wanderers were too far gone and the man in at three saw them home. They finish eighth in their table and also safe from the drop, that fate has long resided with Woking & Horsell.

In saying goodbye to the season we have also crowned our CCC PlayCricket MVP after a hotly contested battle over on the socials all season. The premise: fantasy football style points are allocated to every player across all sections by PlayCricket with figures entered. So to that end this season's accolade goes to Jamie Anthony! After a late surge up the table (moving up three places in a week) Jants is crowned our winner with 78 points. Please accept our virtual shot of nasty black sambuca. Special note to Josh Fyfe too who's the only Colt in our top 20, coming in at 18.

The Ladies have had a jam-packed week with their annual entertaining friendly against Dad's Army on Thursday, a squad of 15 v 15 we hear, and their home round of the Smash It softball tournament on Sunday - taking on Wimbledon, Walton, and Effingham, and after an impressive fun-filled day in the sun they came away winning all four of their pairs-format battles!

The U14s took on Wimbledon at home on Sunday morning in a friendly, and batting first, they put in an outstanding performance reaching 157-4 in their 20 overs - a first appearance for Luke Russell and Ed Marsh and Arthur Walmsley retiring. In reply Ed Marsh picked up wickets 50-53 of the season, and Mark Lemon excelling in the field for the second day in a row with a catch and a run out. Wimbledon, after a good start, had a middle order collapse which they never quite recovered from, and the U14s won by 25 runs.

Welcome to the Bonus Season... bring your knitwear and a flask of tea. In a change to the advertised (the Strollers weren't let out of their retirement home on good behaviour) a Neil Latham XI will be taking on the Authors tomorrow, a team of respected cricket journalists, authors, and broadcasters (we're talking about the Authors) - now in their tenth year. One of their alumni, Tom Holland, is also in his testimonial year so catch them before they head to Corfu on a tour (still the Authors).

We had some sad news come out of the weekend, as we heard our effervescent and all round lovely legend that is Mr Martin Allen announce the game on Saturday would be his last league game for the Club after fifty golden years in the business, and a lot of love was shared over on the socials by members who've had the pleasure throughout his tenure. We're sure its not the last we've seen of him - in fact he's done a Burton on us and we've persuaded him back into action this Saturday for the Neil Latham XI so come down and see him in action one last time...