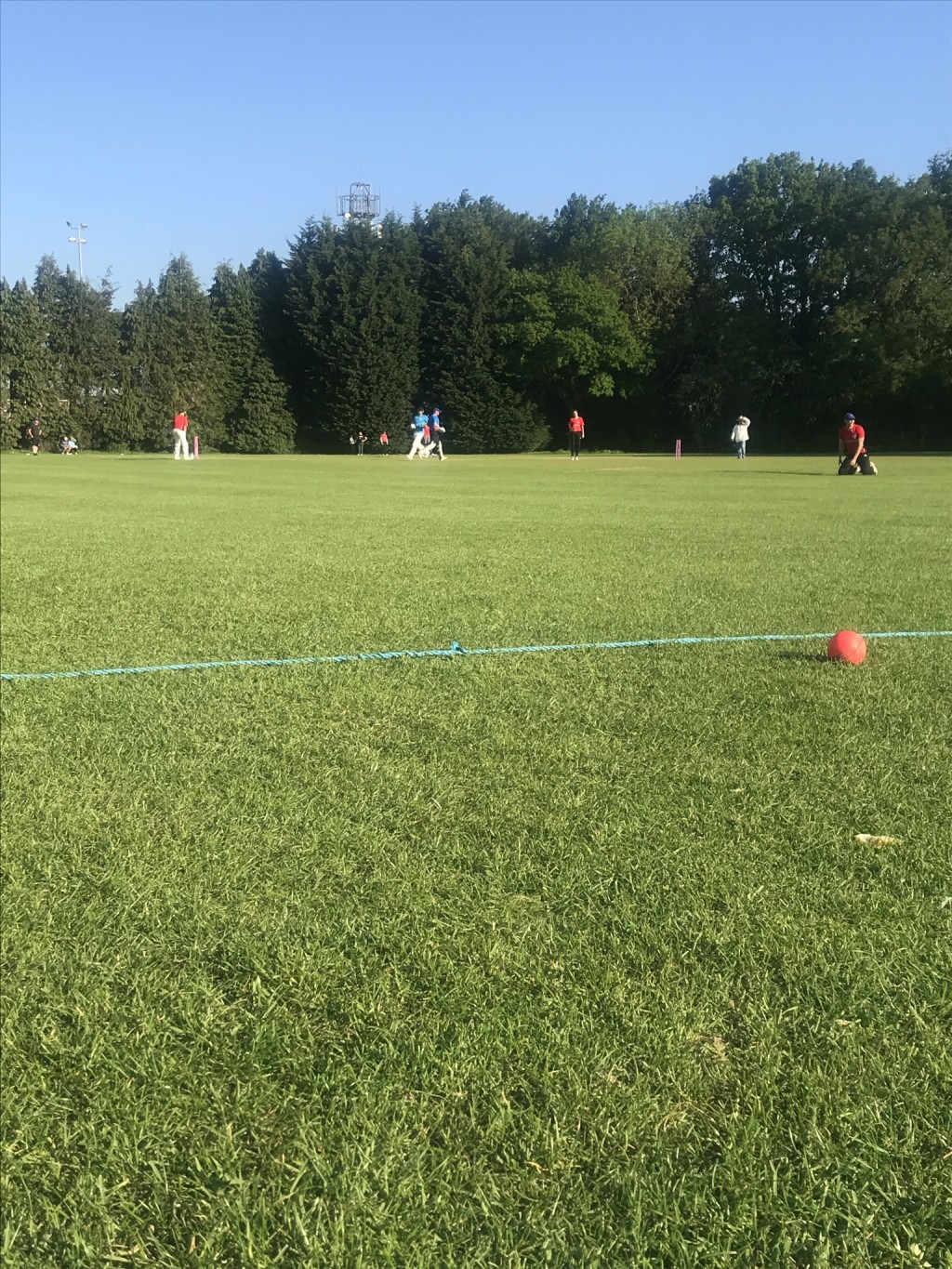 Still nursing the tiger stripes? Compared to the biblical rain we had two weeks ago we'll take this all day long... What a scorcher the last week has been - and that's just the cricket.

The pearl of the weekend was surely CPL Round One, it had everything - red hot rays, bombshells, and exceptional performances, so... Sunday, let's get right into it.

The first game of the day, Grove Armada v Bourne Stars embodied the CPL at its finest. The Armada lost the Nandos card toss and batted first. Controversially they didn't call on any legends (Captain Nuti Jnr calling on the best 2nd XI bowler/batsman of the 1993, 2008, 2010, & 2012 seasons, Nuti Snr as one of his luxuries), and at the other end of the ahem, age spectrum was our first of five U14s Colts debutants, the 6ft 5" Dylan Pandya for the Stars, who bagged himself the first ever Colts CPL wicket and our first dab on the bingo card.

It didn't start well for the Armada with Dan Perks back in the hold second ball, but this made way for David Sloan, who hung around tormenting the Stars for much of the innings, scoring runs for fun in a productive partnership in particular with Jacob Loveridge, and he was unlucky not to carry his bat and earn the moment of the round in the process (it was very close with our winner btw), out on an imperial 118, the Armada setting the gargantuan target of 210 to win. In reply the Stars just couldn't find the same magic the Armada had, brothers Tom and Troy Bolger batting together for the first time in the CPL, and once these two departed you just felt it was out of the Star's reach with such a high target in front of them. Special note to the Nuti Snr-Boast contest though, managing to catch each other out with glee.

In was in the middle of the Stars' batting innings when our attention was diverted though, the reason? No not the smell of halloumi fries, but our first glimpse of possibly the best kept secret of the round - it was teased for ages, we dropped numerous hints, we didn't even really believe it was going to happen until 2.45pm on the day, the appearance of former England spinner Mr Monty Panesar, currently plying his trade for Twickenham, who was enlisted as a luxury player for Meads Enforcers, setting arguably the biggest coup in CPL history.

Once we'd got over the initial shock of an ex-England international in our midst, the second match of the day saw a replay of the CPL2020 Final, Meads Enforcers v Gogmore Knights. The game brought us two very important things - another four Colts debutants (Ethan Austin, Ed Marsh, and Arthur Walmsley for the Knights and Josh Fyfe for the Enforcers - Dylan came back as a substitute fielder - more why on that later), and the partnership we'd been waiting to see, Karthik Menon and Zeeshan Mehtab. The Knights lost Captain JR second ball (b Panesar) but Zeeshan was like a man on a mission and was determined to make up for lost time. Colt Josh Fyfe came into the attack and showed the batsmen he meant business, coming away with a wicket for his trouble. The Knights reached 150 within 16 overs (Zeeshan scoring our second century of the day) but it was in the 19th over we had a horrific collision, Zeeshan & Jamie Anthony both looking towards the four, collided mid-wicket, Zeeshan coming off the worst, and having been administered first aid and coming off retired on the ominous 111 the first thing he asked was "Did that last ball go for four?” His performance earns him our CPL Moment of the Round. Special mention also to Molly Sellars who became the first female of the CPL2021 tournament after her blistering innings for the Ladies in the league the week before.

The Enforcers required 187 to win, but they just didn't factor in those fearless kids running amok. Things started strongly with the openers of Risk & Tindall amassing 57 runs between them, but the youth terrorised the top order, the battle between Ethan Austin and luxury Allan "Big Al" Inwood the most entertaining, with James Tindall becoming Ethan's victim, Big Al falling to an Arthur Walmsley stumping, Ed Marsh bagging the scalp of Matt Wiggins. Once Big Al had departed things started to crumble for the Enforcers, Luke Westcott the only real highlight with an impassioned 45*, but it wasn't enough to surpass the total and the Knights came away with the win, Zeeshan's scrape very much worth the battle wounds.

Grove Armada go into Round Two (Sunday 27th June) top of the table (on net run rate at the moment so its all to play for) - we're going to try to top Round One, so you daren't miss it.

We are also pleased to announce we have secured another sponsor for the score box -  Eventify was created with a pledge to create special events. With over 15 years of London agency experience, Eventify is committed to providing an unrivalled bespoke and personal service, no matter the size of your event. From free venue finding across the UK and international destinations as well as full, end-to-end event management, they  tailor everything they do with you in mind. Visit them here at www.eventifyuk.com

If you want to sponsor the Club we have plenty more options on offer, visit www.chertseycc.org.uk/pages/sponsors for more info.

On our arrival to Hampton Wick on Saturday it wasn't just the blisteringly hot weather making us wince, the 1s were batting and not in a good shape, 30-4, trying desperately to rebuild. It was the middle order of Risk-Ogle-Hanger that managed to shore things up somewhat, and they went on to finish the innings 114 all out understandably despondent. Hampton Wick started their battings innings strong, but they had the opposite problem, a leaky middle order, losing four wickets for four runs, 53-5... Game on. Confidence built and wickets started to tumble, the ying/yang combination of Westcott & Cooper ripped through the tail with four a-piece and the 1s left Bushey Park with a valuable win, now sitting pretty atop the league table.

The 2s fielded first against 2nd-placed Old Ruts, who stayed consistent throughout their overs, Cade Skelton the best of the bowlers coming away with three. In reply the 2s found themselves 17-2 but despite the partnership of Baldwin-Wiggins digging in for 70, a mini-collapse in the middle order meant the tail just couldn't quite get over the line and they fell to a loss by just 10 runs.

The 3s started strongly against Ashford at the Rec - three wickets coming for two runs (a run out by Harry Nuti and Jack Lloyd with a wonder catch to see off the fourth wicket amongst all that) brought a glimmer of hope, but you felt Ashford maybe had a few too many than they should have had in the bank, and it was going to be one of those afternoons for the 3s. Dan Perks was unlucky not to capitalise on his 34, but it relied on Phil Boast (74) to hang around and see things out. Partners came and went it was looking like a lot off not a lot required (Joe Blanks notable, doing what Joe Blanks does and feeding off the new enforced T20 format, Sam Stratton digging in with fresh legs), and it came down to the last over. The last ball. We won't talk about which last ball (that's down to interpretation), but the outcome was the 3s losing by just one run.

The 4s on the other hand had a whale of a time over at Shepperton, once they'd found the Halliford pitch. We had a returnee - Tommy Duffy, and debutant Johnny Killhams, who eased themselves in nice & gently picking up three wickets each (Dylan Pandya & Ethan Austin with one each too), the other two wickets run outs, one of which was a worldy direct hit from Captain Sam Toone. In reply there were overs to play with, and Felix Reisch filled his boots, adding 48* to his season total, the win coming in the 16th over.

Roll onto Tuesday, which saw the Seniors take on Normandy away in the second round of the Surrey Championship T20 Cup, and after dismissing the opener in the second over, Chertsey struggled to make a dent for the second wicket, bowler Josh Jackman impressing with his effort. It was Will Cooper though who made the breakthrough with two wickets in two identical balls, full tosses, caught Westcott. Chertsey needed 150 to win and in reply started aggressively, Simon Bell pulling off some sublime T20 shots for his 41, but the slow outfield and careful field positioning made it hard for the Chertsey batsmen to capitalise, and the game ebbed away in the final over.

The Colts have had a busy old time of it as per, last Thursday's U10s Colts cup game v Esher even featured a set of twins (Zachary & Theo Edwards) and a set of triplets (Max, Oscar, Leo Toogood)...

Please note before each game on Saturday we will be observing a moment of reflection for club volunteers and players lost during the Covid pandemic.

Attention Colts parents: Save the date - Colts Dinner will be on Saturday 18th September, so dig out the best bib & tucker, we’ll be in touch shortly with all the details.

We have our first match sponsor of the season for the 2nd XI game at home to Sutton this Saturday - Groundsman Murray Sanger, so picked due to Sutton’s reputation we hear.

If you want to sponsor a match from just a £20 donation just pick your fixture and email chertseycchire@outlook.com, it's as easy as that.