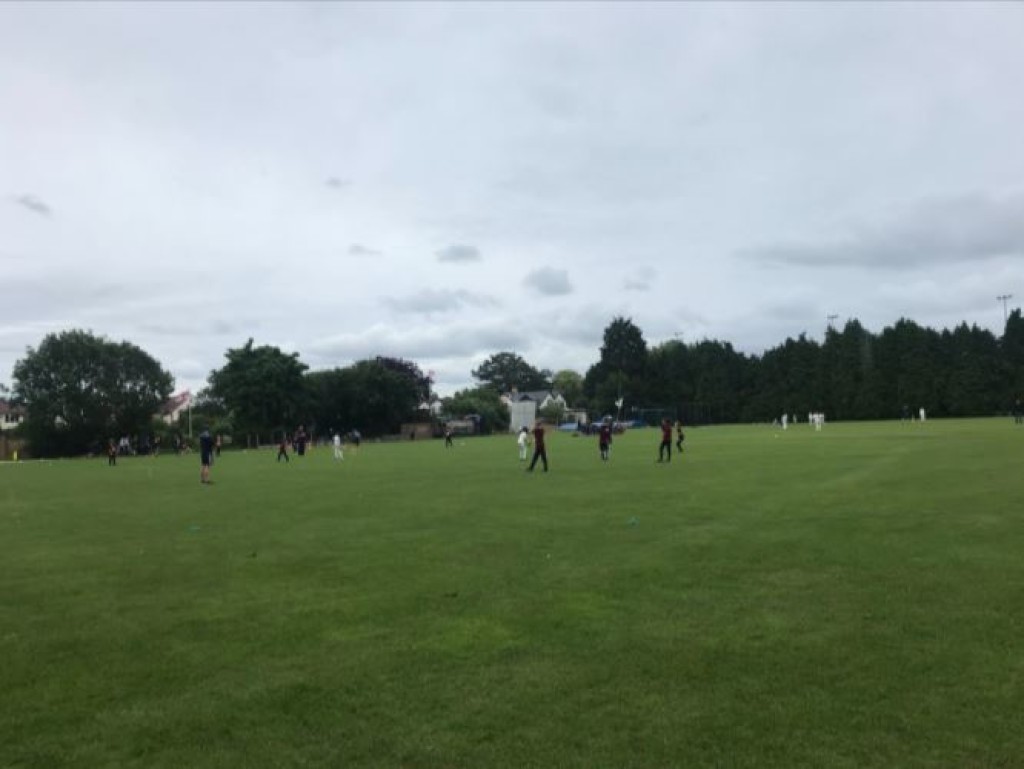 After fifty-five years, 302 games, countless years of heartache, we as a nation are now just one game away. ONE GAME Claire, one game from it potentially coming home... Eeeeeeeeeeeeeek! It's the day after the night before and we're now converted to the tournament that's brought the nation together and we will be hoping non tornerà a casa for our Italian friends come Sunday night. Everything crossed, and if you need advice on how to celebrate a monumental tournament win football lot, we've had two years bragging about our cricket one, so we can give you some tips. Had to get that in.

So if you'd like to join us to watch THE EURO 2021 FINAL in the Clubhouse Sunday night it's the drill from the previous England games for the final time - you will need to book a table, and follow the below:

When in the Clubhouse for the match and at all other times you must follow the bar protocols in regards to wearing a mask when not seated, ensure you are not walking around or standing with drinks, and allow the bar staff to serve you at your table.

Its all about celebrating the Colts of CCC first and foremost on Sunday when they take over the Club for the return of a CCC staple, Colts Day from 9.30am (meet 9am) and after a year off we are mad excited and proud to see 124 Colts (our biggest group ever!) making up eight teams vying for their place on the trophy as winners of the inaugural Jim Denyer Colts Day Cup - so named after our beloved ex-President Jim Denyer who sadly passed away in January, a fitting tribute we think you will agree.

It's so huge we've given them their own page over on the website (https://chertseycc.org.uk/pages/colts-day-2021) where you can find all the teams (released yesterday),  you can check out the order of play, and the “What To… Not To… How To… Where To..” Guide - make sure you digest this - it's a very important read that bit.

- If you or anyone within your household is self-isolating please DO NOT come to the club, and inform your age group coach immediately if it is a colt.

- If you or anyone within your household has any symptoms of Covid please DO NOT come to the club.

- Register with QR code on arrival

- The bar will be CLOSED until after the Colts Day Final. Please bring your own food/drink (burger and ice cream vans will be open, burger van for breakfast onwards) and remember to take your rubbish home with you.

- Pavilion will be open for use of toilets, please wear a mask when you enter.

- We have arranged the day to limit movement of the teams, as parents we ask that you also minimise your movements around the ground and maintain all social distancing protocols.

- A one-way system will be in place for entering and exiting the ground. On arrival please access the field by going around the back of the clubhouse. To exit, please use the gap to the right of the clubhouse nets.

Can Rosie's Raiders do the double, or will we see a new kid on the block? We shall see Sunday...

In other news, we are super pleased to announce we have a new Main Sponsor! Please be upstanding and give a very warm welcome to CCC's Paul Wells and the team at Ecosphere Global Logistics! You will see their logo popping up shortly on the front entrance sign, on the covers, and pride of place on the side of the Clubhouse and we very much look forward to the affiliation for the next year.

A bit about them: from supply chain management to freight optimisation, trade consultancy to scalable hi-tech AI, their expertise permeates every aspect of the company. Their logistics and supply chain solutions are intelligently customised to suit modern-day business needs. Utilising the Eco X digital platform to provide live connectivity and seamless communication, Ecosphere Global Logistics makes light work of international trade. Visit them at www.ecospheregl.com for more info.

Every ground we went to Saturday had a distinctly muggy atmosphere. The 4s played top of the table Malden Wanderers and we had two debutants - Felix Labaki and Will Morris of the U14s (the latter of who bagged a wicket on debut - that seems to be a common occurrence Sir...). Batting first, the oppo did their upmost to hang around and cause as many problems as they could but President Pullo (the oppo rated him as their most feared bowler) had other ideas and once he'd dismissed one we could smell another in the air so it was just a matter of time. Ricky Redmond made his second appearance of the season (he just can't get enough!), top scoring with 23, and another returnee was Finlay Lloyd, who looked in fine fettle in his first game back from injury. Unfortunately the total set was a bridge too far and the 4s left Malden without a win.

The 3s were over at the Rec facing an enthusiastic Kingstonian team, the 3s feeling they had probably gifted them a few more that they would have liked and work to do. We welcomed Vishnu Yadav on debut, who was in the wickets with 2-25, and earned a membership to the two-wicket club with Jack Lloyd, Sam Stratton, Josh Fyfe, and in reply we felt that if Elliott Bloomfield had just hung around for bit longer at the crease (an assured innings from the off) we may have been writing a different story, and they came away just nine short of the total.

The 1s headed into deepest darkest Purley and had 33 overs to play with each way following a 2-hour rain delay, the only team to suffer the wrath of the weather. Batting first, they went along steadily, Karthik Menon (20), Simon Bell (41), Jake Taylor (42), and Dave Risk (25) helped ensure a healthy total of 163 all out and in reply Purley found themselves at the mercy of Jamie Anthony, knocking on the door of the FBU surely by earning himself his second league 5-wicket haul of the season. Purley didn't quite get to the total though in the overs and we had our first one of those mind-bogglers of the timed game, a draw, in the 1s' favour. Let us try to explain this scenario (we may get this muddled, it makes our head hurt). In a 100-over timed game (1s & 2s' matches) if the team batting second doesn't get the total (and aren't all out) in the overs afforded to them by the team batting first (the toss winners can choose up to 55 to play with, leaving the other with 45 for example) it is deemed a draw and a winning or losing draw depending on who came out with the most runs (so because we got more runs and Purley stayed in its a winning draw in our favour). Make sense? Us neither. I'm sure one of you will clarify - we'll grab a whiteboard.

The 2s graced the Edward Stern taking on Walton and we had another draw and another head scratcher - this one just not in our favour - spoiler alert. Walton declared on 179-7 after 48 overs, Ravi Patel walking away with three wickets. Now this one means we had our overs plus the leftover unused overs to play with and it was James Baldwin at four who made the biggest dent with 45 and our own Jack Leach himself Stuart Eagles who padded out for the draw with no score for 21 balls - at one point he had every Walton player up in his grill but Eagles coolly held his nerve.

Now, we've just reached the halfway point of the season, so where are we at in our leagues? The 1s are second, sixteen off the leader Hampton Wick. The 2s find themselves bottom and the 3s and 4s have work to do after moving to seventh in their tables. 9 weeks is plenty of time...

The Ladies faced their Walton counterparts on Wednesday night in the Slam and batting first, Walton lost their first wicket to Bronwyn Mayne early with the score on 4-1. Bonnie Edward bowled economically with her three overs going for just 11 but it was Rosie Barnes who came away with a brace of wickets and the Ladies were set 88 to win. In reply opener Lucy Weber held her nerve as she did in the game on Sunday at Richmond, carrying her bat right through til the last over and top scoring in the chase with 27, until the penultimate ball left three required and an overthrow meant the game ended level. Carnage.

The Ladies also had a bit of good news this week as Mary O'Farrell has won the Surrey Foundation's Women's Big Cricket Month award.  for her work in the ladies game.

The Sunday XI took on Ottershaw in the A320 derby lead by stand in Captain Luke Westcott and despite the game being hampered by an epic downpour during the fielding innings, they pressed on after a short delay and Ottershaw reached 222 off their 40 overs. Maff Barnes impressed with his first wicket and runs (12) for the senior side, as did Neil Latham with his best batting figures so far this season with 42 but they ran out of overs and Ottershaw travelled back with a win.

Monday evening saw a packed Edward Stern, and with an keen eye on the two games - the U10s taking on East Molesey (some in their first hard ball game) and the U11s v Leatherhead, they persevered through the drizzle and the U10s' game went down to the final ball, from which an epic win was secured. The U10s are now not far away now from a league win so all eyes will be on their final game later on in the month when the Colts season concludes and our front-runner for first silverware of the season.

If you want to follow his lead and sponsor some matches from as little as £20, you can find all the details here.