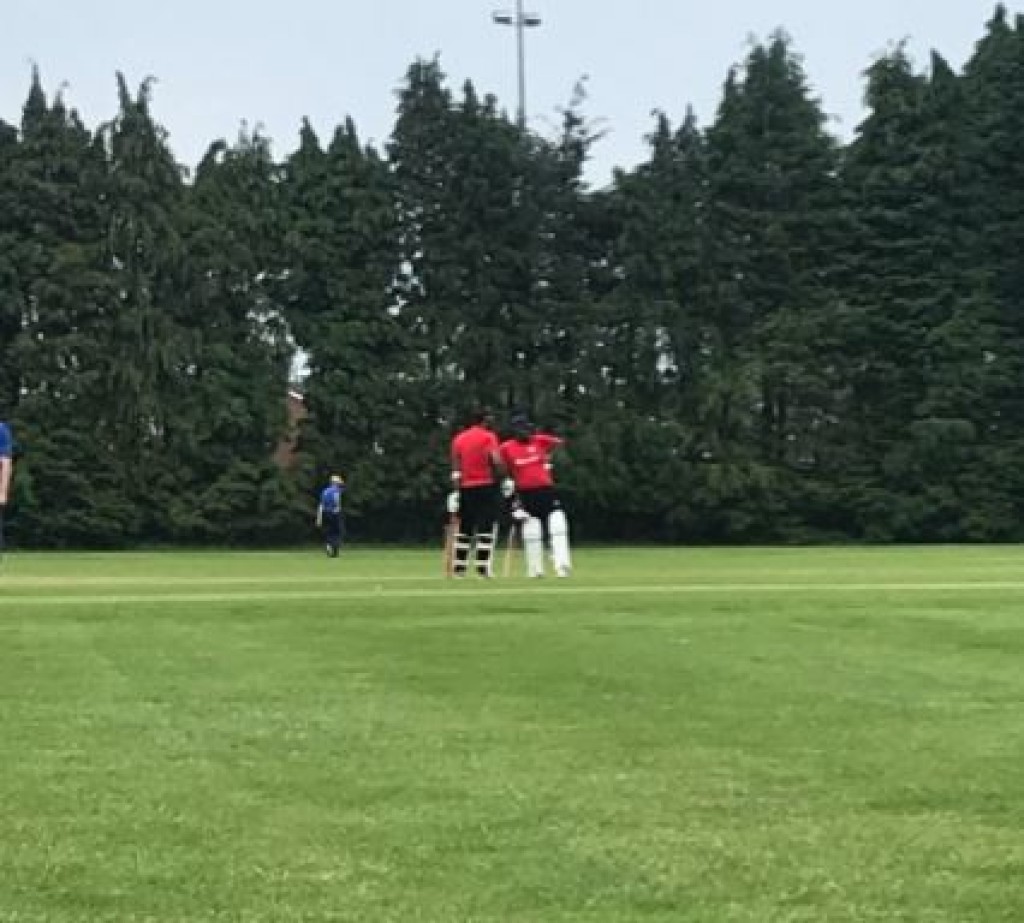 Bluecaps in Brief: World At Your Feet

Tuesday night... What a game, it had everything... A contentious line up, a last minute win, Surrey v Glamorgan didn't disappoint did it... Woah, woah, what game were YOU watching?

Colts Day is just around the corner on Sunday July 11th, and we just can't wait. Colts parents, you will have seen prodding from the Coaches this week in the Whatsapp groups to get your Colt's name in for selection before tomorrow so you've got a slither of time left - don't miss out and post in your group to be involved. As we're still under restrictions we unfortunately can't allow late walk-ins like in previous seasons as we'll be utilising track & trace so make sure you're signed up if you want to be involved. More details to be released next week and in your groups, but we can reveal the games will be played over four pitches, with four groups moving between two at any time for the group games to restrict darting about. We'll also be opening the bar post The Final so you are very welcome to munch on your own cricnic (see what we did) before then.

It was one of our favourite kind of weekends, a CCC in a blender weekend, teams mashed up and thrown around all over the place (giving Captains a major headache), but gifting individuals who may not normally feature with their time to shine and stake their case in this week's selection talks. Paul Hardwick, David Sloan and Elliott Bloomfield climbed up to the 1s, the 2s rolled back the years with Lee Houghton, Cameron Wakefield & Phil Boast returning to the fray, Sam Woolford made his 2s debut - hopping up from the 4s after impressing in recent weeks, and Arthur Walmsley returned to bat at 4. For the 3s we had 13 year old sensations Thijs Wjingaarden and Aidan Cassin making their debuts, along with Ricky Redmond hoiked out of semi-retirement, Martin Allen moving up, and three Barnes' playing for the 4s (Rosie, James & Nick - Maff disappointed to have missed out to make it a quadruplet) along with Robin Sellars making his (hopefully not last this season) appearance. Still with us? Let's see how they got on.

The 3s were on the Upper Pitch at picturesque Normandy, and fielding first, they found themselves fully immersed in a game for the purist with some persistent openers that just wouldn't vacate the crease. One thing that made us spectators vacate was a tidal wave of bees midway through the bowling innings and once the drinks break was done and the bees were moved on the bowlers managed to calm Normandy down somewhat ("Beardy" Steve Reynolds notable) and their persistence finally paid off in debutant Thijs bagging the first wicket (his first of two in the afternoon) with Normandy on 129 via the hands of Ethan Austin on the boundary, a difficult catch plucked out the sky (one of two incredible skiers he bagged in the afternoon by the way). Normandy went to 239-3 and in reply the 3s had not only a chatty field but rapid bowling to contend with. They had a top-order collapse and although it didn't make for pretty cricket, Thijs, Captain Lloyd, and Beardy Steve steadied the ship, not only frustrating Normandy but adding runs to the total bit by bit. Props to Aidan Cassin for seeing out the rapid bowler, but unfortunately it was to no avail and the loss was sealed.

The 2s fielded first over at Banstead, a club well-renowned for its batting. Playing to form the 2s got their opener early via the hands of Stuart Eagles, but it took a little bit longer to get the second wicket, a damaging partnership overall. The 2s' fielding was immense, with four caught & bowled wickets in the innings, but Banstead took advantage of their overs and ended on 196. In reply Cade Skelton impressed with 38, Troy Bolger tried to go big too but ended just short of the best figures personally with 37, and the loss was sealed.

Back home at the Edward Stern the 1s took on 8th-placed Old Pauline on what would turn out to be a fun-packed wicket, and when we left them Banstead had just lost their first - still looking ok around 32-2, but then a collapse of giant-jenga proportions meant just 27 runs were accumulated by the last eight - Josh Jackman and Jacob Loveridge (who bagged 3 wickets) pulling the pieces out around the second wicket, JJ going onto earn incredible figures of 5-3-4-5 (Will Cooper with a wonder catch for the 7th wicket and JJ's fourth) and Old Pauline found themselves flummoxed on 67 all out. The 1s had overs to spare so could take their time but Old Pauline fought back. The top 6 returned 28 runs, but Jacob Loveridge dug in and contributed 27 to the cause and with Will Cooper (10) for company brought it home.

The 4s went against the day's grain and opted to bat first, Captain Sam Toone and Neil Latham holding the crease for a time together and putting on 49 between them, but they found themselves all out for 83 v Walton. Walton's opener departed with the score on 8, a glimmer, and despite Sam Toone and Josh Loveridge coming away with 2 wickets a-piece the total was just a bit too skinny and the 4s left the Rec with a loss.

So let's unpack Sunday, Round Two of CPL2021. With one eye on the impending rain forecast for later in the day, we started with Gogmore Knights taking on Grove Armada, 2 v 1 in the table. The Armada won the toss, and putting the Knights in may have been a bad decision, as legendary opener Karthik Menon along with Paul Hardwick started excellently, and once Hardwick departed on 16, and Captain James Richards departed for 20, it brought in the pairing we always love to see, Zeeshan Mehtab and Karthik, who work together in sync. The pairing opened the floodgates, Zeeshan leaving the door open for Karthik to show just how classy he is and bank his first century of the season marked with a gargantuan six, Karthik going on to carry his bat through the innings ending on 111* and earning himself the Moment of the Round. Zeeshan himself was unlucky not to make his 50, running out of overs and ending on 47*, the Knights completing their innings on 211-2. Public Drafter Felix Reisch was also given a baptism of fire, being handed the keeping gloves, and doing a marvellous job we must say.

In reply the Armada rallied, David Sloan showing his CPL class putting on 56, and with wicket-mate legend Jonathan Dodd (26) both flowed along nicely, also with Jacob Loveridge (25) once Dodd had departed. Cade Skelton brought fireworks with 32 but once he had gone there wasn't much to come and the Knights came away victorious.

The final game of the day saw Meads Enforcers take on Bourne Stars, managing to keep the weather at bay for the majority of the innings, albeit on a slippier deck. The Enforcers, with a strong batting line up were steady, Dave Risk falling to Colt Dylan Pandya on 30, the first of his two wickets of the day, also nicking the scalp of Jake Taylor... Luxury "Big" Allan Inwood sprayed the ball around as Big Al does, falling just inches short of the telephone tower a couple of times, going for 37 off the bowling of Troy Bolger. The partnership of Hanger and Westcott proved fruitful too, with Ben ending on 31 and Luke 21*, the Enforcers ending on 179-5.

The Stars struggled to get going in their innings, perhaps the drizzle played a part, Elliott Bloomfield and luxury Gordon Leeks starting well putting on 42 between them but the team were bamboozled by some wonder catches - one from Jake Taylor at the second attempt at mid on for the wicket of Leeks, and two from Captain Ben Hanger one handed whilst running towards the boundary. A particular highlight of the innings was the debut of U15-er William Morris for the Enforcers, who having already achieved figures of 2-7 this season for the Colts, came away with two wickets - Coach Phil Boast no less and Neil Latham, and Josh Fyfe coming away with figures of 2-23, one wicket managing to split John Bailey's stumps effortlessly. The Stars fell to 132 all out just as the heavens opened and Round Two was complete.

So where does that leave us? The day would always shake the table up but the Armada find themselves toppled following the Knights' win, with Meads Enforcers leapfrogging them to go second with a full round to go on 25th July, Bourne Stars languishing at the foot of the table.

The Ladies headed over to Walton on Sunday to compete in their first softball Smash It tournament of the season following a new revamped league-style format, and competing against Wimbledon, Walton, Effingham & Pyrford the mixture of Ladies & Bluebirds went on to win three of their games and had bags of fun in the process.

Moving onto the Colts, the U10s bounced back with an epic win over their Windsor counterparts on Sunday, Max Toogood top scoring with 21, and Theo Edwards earning figures of 3-0 off his two overs, a win by 116 runs.

The U14 development team faced Hampton Wick Royal on Friday night and had two maxed-out retirees, Mickey Grigg and Captain James Pearson, Jack Reisch moving up and bagging figures of 2-5. They also nabbed a win against Camberley last night with Thjis Wjingaarden 30 (ret), and Ed Marsh 3-20) the top scorers. The U15s had an epic game Monday over at the Club too, Ed Marsh with a staggering 61* in the defeat against Woking & Horsell.

There was big news in U9-land, they bagged their first win last week in front of the home fans against Maori Oxshott scoring 77-3! Shout out to all Coaches but in particular Marc and Simon who are doing a fabulous job.

With the Social League nearing its mid-way point, lets check in and look at the table - its between Marist and 2019 winners the Pirates for the trophy come August but that can all change with Dads Army nipping at their heels. Catch the Social League every Thursday night at either the Club, Abbeyfield, or Chertsey Rec for your fix of T20 pyjama cricket...

U13 dev v Walton on Thames

It's still coming home you know....