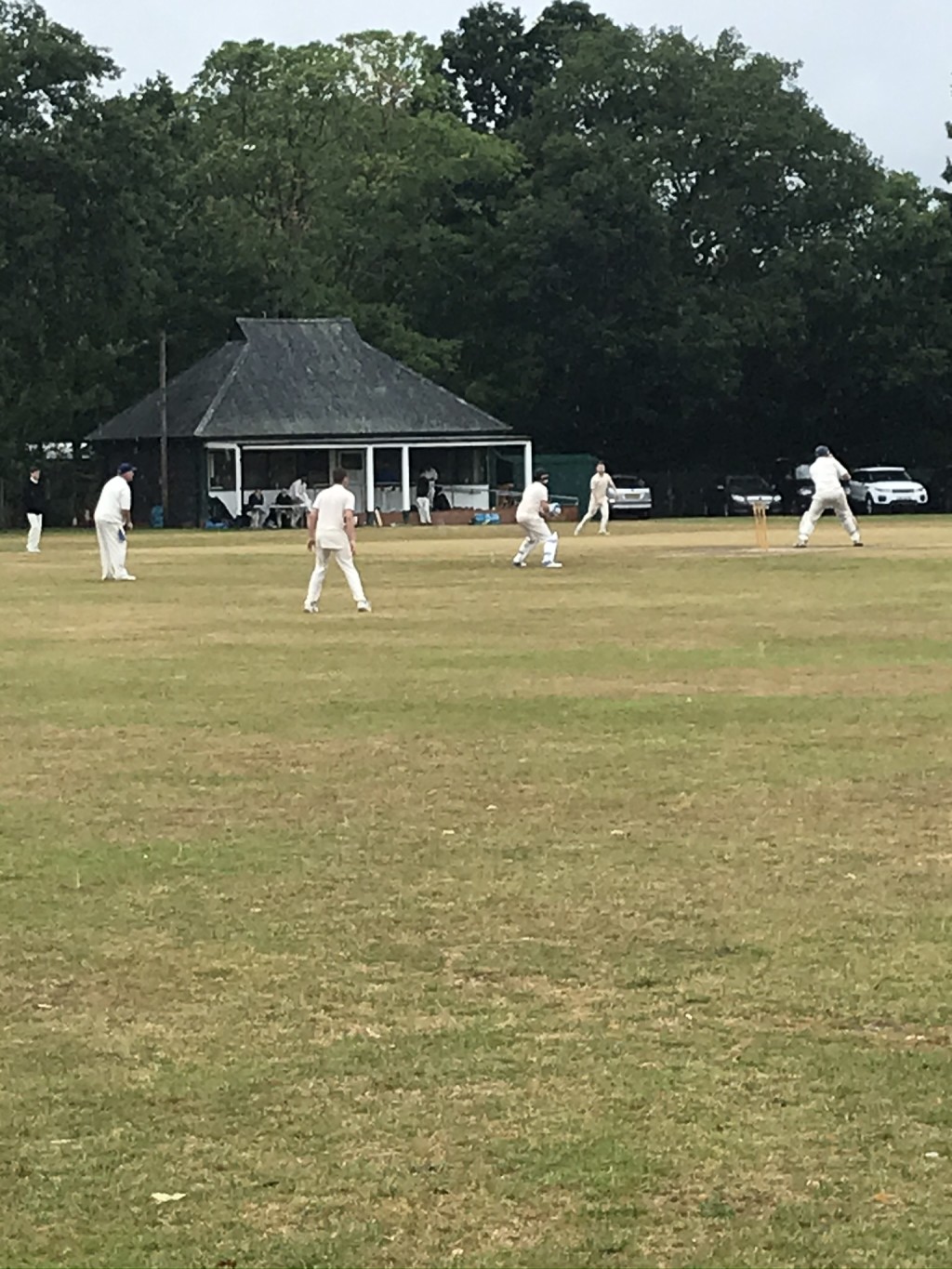 Saturday saw the first round proper of the AJ Fordham & Fuller's "Challenge Cup", for the 1s in group 2, 2s in group 15, & 3s in group 28. We plonked ourselves down right in the middle of the 1s and 3s matches at the delightful as ever Staines & Laleham (both fielding), feeling content there was to be no cross-country traipsing today. With both sides fielding, we watched who started bowling the over and then listened out for noise indicating a wicket (the 3s the louder of the two teams, they have a tendancy to be very encouragingly vocal at each other (and towards teammates playing on the other pitch) every other ball), which is great, but as you can imagine our head was like the girl from the Exorcist by the time the dark clouds and subsequent inevitable downpour decended about 90 minutes in. It was always a matter of when rather than if unfortunately. As three games were abandoned due to the rain sadly there's no counted notable mentions for those matches, so we've had to go by memory or tales - always dangerous. Matt Main of the 1s told us to tell you he got a one-handed catch (sounded a bit dubious though to be fair), and we did actually witness Colt Charlie Eagles get a wicket first ball and the returning Joe Blanks snatch 2 wickets for the 3s. You'll just have to take our word for it though. All three abandoned games accumulate 4 points towards the league table so that means we're all roughly mid-table after week 1, not a bad position to start from for 90 minutes of cricket I guess.

We would however like to make a formal apology for our behaviour on Saturday afternoon, in particular to any players affected by our quickness to post the status of their abandoned games on social media, who were then subsequently called by partners and told to return home to carry out "jobs" now a free afternoon had suddenly appeared. We will wait the agreed 90 minutes "grace" period going forward, enough time for two swift pints and a chaser at least. We're just surprised anyone was actually watching the live comms to be fair, so we're thinking of renaming it "Husband Tracker" from now on.

As we trundled back to Chertsey a bit soggy round the edges and ready to dig out "The Cards", we noticed an absence in the clubhouse - no 4th XI? "Rec's flakier than Tony the Tiger, we'll just drive past" we thought. Glad we did - those mad fruits were playing in the rain, all they had was Boasty's newly-fashioned cravat for protection against the elements between them. There was method in their madness though, to gets as many overs in as they could for the Colts, and the weather actually picked up once they went into bat. Their perseverence finally paid off for a hard-earned win with a couple of overs to spare via a solid stand by James Woollerton and Boasty, both passing 50. We must mention President Pullo also, despite much protesting about not playing this season, managed to bag himself seven wickets in a week, accumulating another four on Saturday. We're taking that chair away Pres. In fact you could find it outside the gates on the grass. On Sunday the London Ovalites were the visitors to the Edward Stern, and despite a loss our way kudos goes to wickie Arthur Walmsley for a pair of stumpings and Lorna Bailey for a trio of wickets.