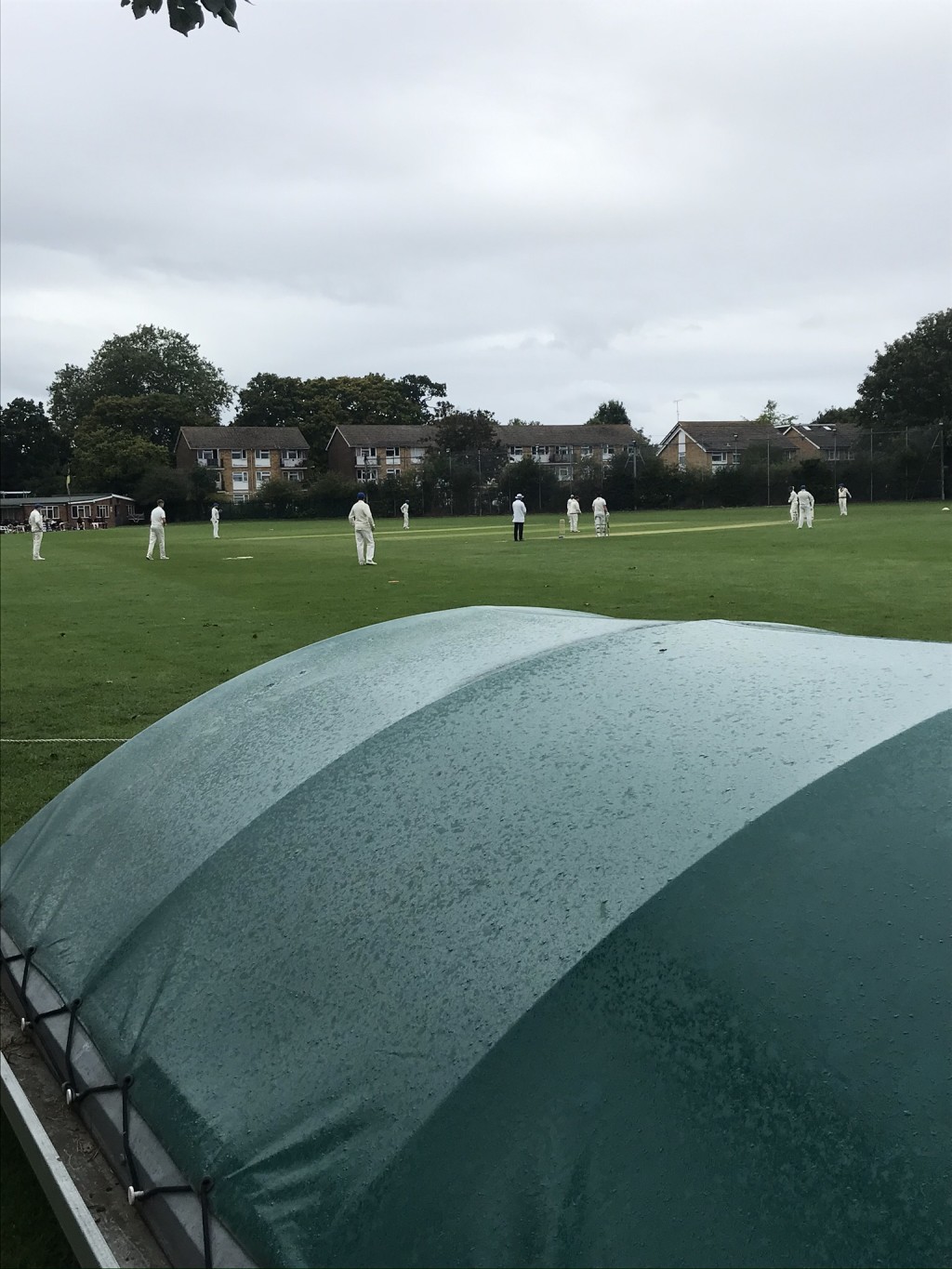 Saturday was the kind of day you'd rather didn't happen, scratch it off, consign it to history. The reasons will become apparent as we go but a definite agreed factor/excuse was that Chertsey was chillier than usual, but bearable with a cup of tea (blue milk obvs), Old Hamptonians however was a completely different kettle of fish, tea wasn't going to help you over there.

We figure OH must be acclimatised to their ground's conditions better than most, but the pitch the 4s were on must have been two or three degrees colder than the 2s over near the Clubhouse and experienced frequent windy rainy drizzles, so traipsing backwards and forwards between the two was interesting, bit like an arctic trek (got the steps in though, 2.5 miles walked that afternoon), especially when the 2s scoreboard was at just the wrong angle to be able to read it properly, even squinting with specs on. One of those days you realised there were probably better things you could be doing in the warm, but we've got to get all the moaning out of our system now. It's our job to find the positives somewhere, so here goes...

The 1st XI version of Old Hamptonians v the 1s bowled tight, and the 1s' top order worked hard for their runs, Jonathan Thompson making his first 1s appearance, moving on up after Jake Taylor's knackered fingers ruled him out, ending on 135-8. When it came to OH's turn they kept steady, and their win was secured with 9 balls to go.

Now, it's been a common theme this season that the 3s find themselves going down a dark, dark tunnel most matches, sometimes they find sunshine on the other side, sometimes they don't quite make it out. Over at the Rec it looked like a repeat of the week before, utter carnage, but this time we had a lot of distractions, what with a Matthew Hoggard circa 2005 lookalike who despite not looking particularly threatening, managed to get three key wickets leaving us open mouthed, and the police parked up outside just about the time Kevin O'Flynn was spectacularyily bowled, so we thought they might have been called by 2005 due to crimes against cricket, or wanting their Hoggy back. There were some positives on the journey though. Joe Blanks, with his attacking mentality, played some "dank" (is that right?) shots, and the partnership of Stratton-Lloydy looked promising. OH were set 89, still mildly achieveable, but unfortuantely one chap managed nearly two thirds of the total on his own and that was the end of that car journey for another week.

The 2s set OH a nice 145 via opener Dan Perks with 30, Cap'n Wiggins with 39, and Cade Skelton with 20 chipping in, game on, but they were frustrated by the OH openers, and they desperately needed a breakthrough, it finally came at 70 runs with a John Bailey wicket. Just as OH passed the 100 mark things started to get a bit interesting and we thought we could have had an exciting mini-collapse on our hands, brought on by a spectacular run out for the third wicket, but the fourth wicket partnership dug in to see OH home and into the warm.

The 4s over on the ice rink, used 9 bowlers, 9! We feel a bit sorry for the fella left out (and the scorer), and possibly realising victory was out of reach with the score set, needed to dig in, and there was plenty of promise, Boasty & Arthur Walmsley making headway, then Josh Fyfe, who provided us with an epic (not out) sliding run out. Charlie Eagles, dropping down from the 3s, brought his new-found experience with him and played some lovely shots but was denied the opportunity to push on. The 4s took their time about it, finishing just a couple of minutes before the 2s. Having just come from the Rec another low score wasn't quite so alarming.

What's interesting about the rarity of all sides playing the same Club on the same day was that in every match we went to, we noticed the same obvious things about the teams we were playing - OH were loud, each side had the same mentality, but were overall just the better side. For all the post-match psychological beating ups, that's all it really boiled down to.