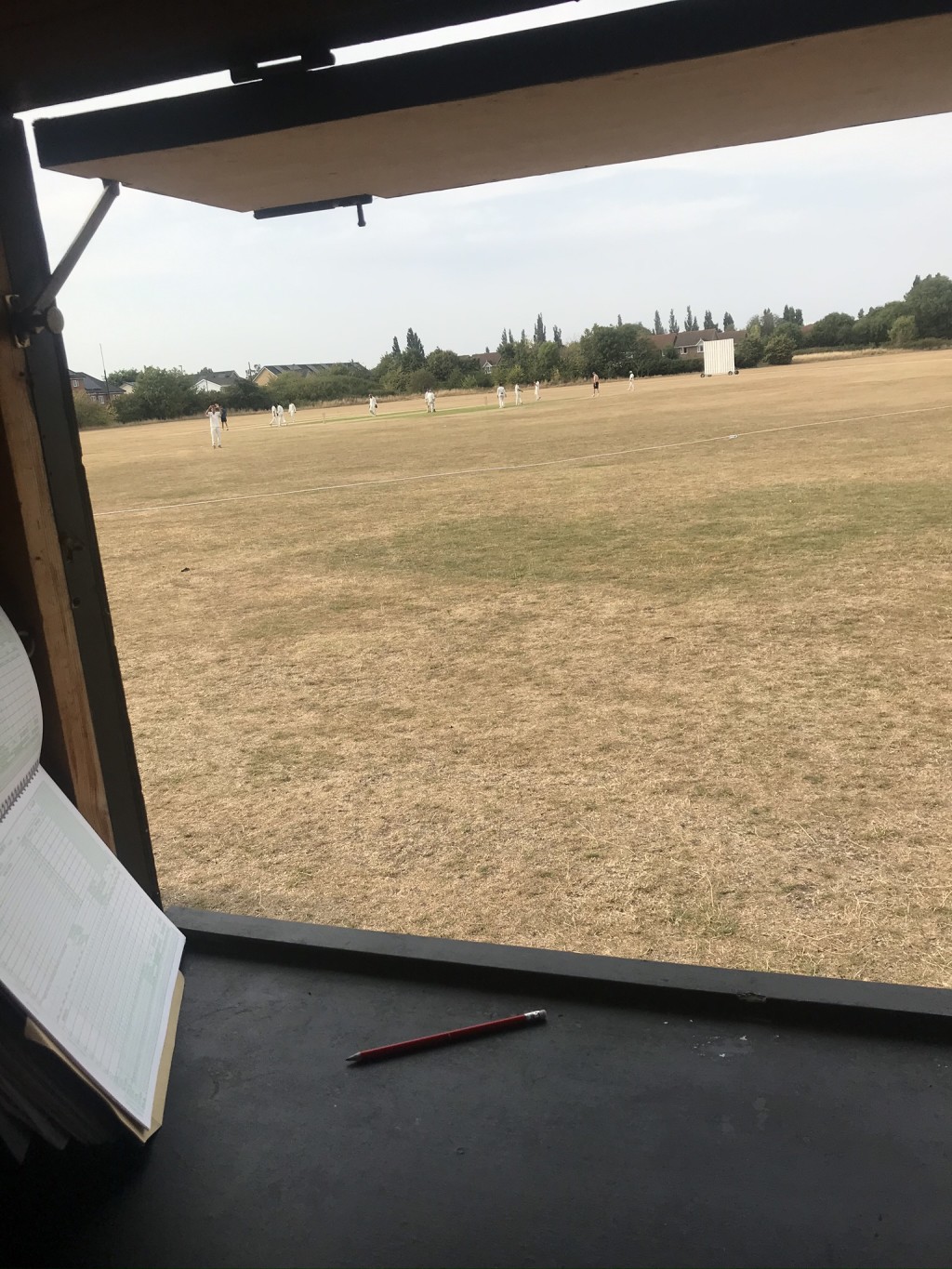 We liken spectating Saturday and Sunday to what one can only imagine it feels like to be a boil in the bag dinner, there was just no let up and certainly no poppty ping after 6 minutes. The only thing that was poppty pinging were wickets, all over the shop, sometimes two at once, which was a Comms nightmare. We found the best way to spectate on Saturday post-McDonalds lunch (when in Rome/Ashford) was in the foetal position, if we'd have moved much further from that we would have self-combusted so sorry 2s & 4s for not popping by. We doff our melted Oreo McFlurry to anyone who ventured more than two feet and were in the thick of it, cricket for the hardcore (or nuts).

From this comfortable position we watched on at pitch no.2 with one eye as Ashford 3s posted 222, which on a par score for the Challenge Cup is on the larger end of the scale shall we say, so we had a terrible feeling the 3s could be in for an unpleasant afternoon after having had to field toiling in the dry Short Lane furnace. But no. They proved us wrong and fought back. Whenever we swiveled round to check on them batting (much mesmerised by the 1s) we were pleansantly surpsised to see they seemed to be doing alright - we'll leave them to it for a bit we thought. The opening partnership of Bill Pulling and Jack Perks laid down a good set of foundations, Bill unlucky not to get to his half century for all his hard work, with Josh Loveridge coming in at three to provide a sturdy platform for the middle order and top-scoring on 53. Things were moving along nicely and a win was in the eyeline when a curious incident of the rare outage "chest before wicket" was given Ravi Patel's way by the Ashford umpire. Something upon consulting Mr Google post-incident seems to be a lesser-seen hairy cousin of LBW, but you'd either have to be umpire of the century to twig it or 3ft tall to be given it, both of which weren't a factor in this situation... perhaps 2s Umpire Allan can quantify for us. The 3s hit a roadbump or two along the way and found themselves 215-9 going into the last couple of overs, and despite all the above elements working against them, they coursed homeward bound with a win in their pocket, their first of the season and probably the most hard-fought so far. Mention also to the speedy Sam Strutton, who made his Club debut, warm welcome to CCC Sir.

The 1s over on pitch no.1 on the other hand managed to wilt their Ashford equivalent to 141-7 with the help of some Westcott bangers. A very accessible total due to their strength in batting depth one would summise while pondering such things drinking port and eating cheese by the fireplace. They too had their fair share of incidence though, dealing mid-way through their fielding innings with an injury to the hand for wickie Snake, who's made of tough stuff and  bounced back, managing to chip in at the total with a vailant 28 when it came to bat. Partnerships were attempted but every time they looked like making it home Ashford stopped them in their tracks, and a flurry of wickets left them on 105-7. Whereas we'd almost doubted the 3s in achieving the mountain they had to climb, it was the 1s who gave us minor trauma, but pushing it home with a Taylor-Loveridge-Anthony collaboration at last knockings.

Over at the Club we had another debutant for the 2s, Jonathon Thompson, who had a busy time of it, keeping wicket, (opening the barclaiming 4 assists then opening the batting to credit his CCC account with 36 and laying good foundations in tandem with Captain Wiggins, setting a partnership of 39 for the first wicket. Welcome Sir, please come back next week. With a nice total of 109 to chase the 2s earned their much-due first win of the season at a canter.

The 4s' were back on home ground hosting Englefield Green at the Rec 4s. The 'Green won the toss and fancied a bat, ending on 189-9 going into the BYOTB. Josh Fyfe had a blinder, with figures of 3-32, dismissing the 'Green's openers via a caughting & bowling and a catch from Boasty, who himself was unlucky not to get a five-fer for his trouble. When it came round to batting despite Arthur and Laurence digging in with 52 runs, overall they couldn't quite get going to match the total - sadly the 4s' first defeat of the season.